When my son was born I decided I wanted us to have a new ornament each year.  We couldn’t afford those lovely and fun Hallmark ornaments, or really any storebought ornaments at all so I found an ornament-making kit for a just a couple of dollars and I started making them the year he turned one.  He kind of helped me with it.  He’d hand me a bead here and there and then he watched me iron it. 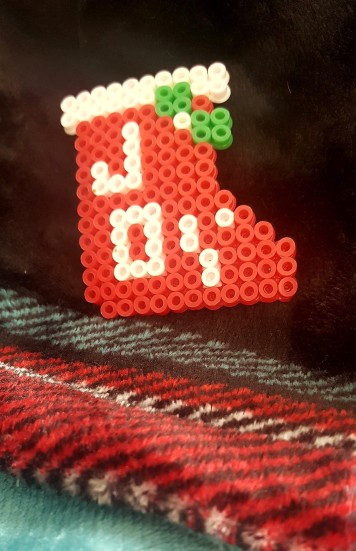 This little ornament started one of my favorite traditions.  The next year, I found another kit for making Christmas ornaments.  It was $19.95 and had the makings for like 25+ ornaments.  He and I each made a new ornament every year from it for years.  When DD was born she joined in.  We still hang each and every one of these ornaments on the tree.  Some were made from paper or cards, foil and cardboard.

As this kit ran out of fun ones it was okay because they usually made something at church and often I was with them so I’d make one too. We still did it together. We’d still try to make something together at home but it wasn’t always an ornament since we did it at church. We did this until DS was probably 14 or so!  It slowed down as they got older and eventually he quit completely.  DD continued on but eventually DH and I started buying an ornament for them here and there.

As long as they were around to decorate the tree we would talk about and remember making the ornaments.  Special memories. I can still see us sitting around the kitchen table passing the glue, glitter, and paper… smiling, laughing, singing… So. Much. Joy.

Now they each have their own trees in their own homes.  DD had her own for the first time last year and she made some of her ornaments and decorations herself.  I hope that as they have kids they remember this tradition and maybe try it with their kids too.  Maybe not every year but at least once.  Special time making memories that last a lifetime.  Who knows… maybe when they’ll come and visit their Grammy and we’ll make some homemade ornaments together once again!  I should probably start collecting ornament making items now, just in case but don’t tell DH!  He thinks I collect too much stuff already.

What are some of your favorite Christmas traditions?  Do any of them involve Christmas ornaments?

The hubs is home and the first pile of Christmas stuff is down to the basement... with a couple of boxes! Just that little bit has made feel better... wish I was more help! But I get tired so easily... @chief_sw_williams is the best. ❤️❤️❤️
This was the view outside my window this morning. It was shockingly beautiful as I threw open the curtains. The moon just seemed to hollar good morning right to my heart. Immediately I felt stronger and revived. I even threw on a sweatshirt and ran outside to get a better look. It’s the little things... seeing the moon in the early morning light, LONG phone calls late at night with special loved ones, waking to a beautiful bouquet of flowers on the dresser ... that can make all the ick a little less icky. #goodmorningmoon #thelittlethings #gratitude
I have been sicker than sick since Wednesday. I mean pain that may have equaled or surpassed childbirth. When the doctor asked on a scale of 1-10 how bad has your pain been, I said 15!! I finally broke down on the phone with Shannon last night crying because I felt so bad and there was no one around in the house to ask would go get me... and I couldn’t ask anyone else to do it because yes, I still have Christmas decorations on the floor and I couldn’t let anyone see that! Not saying this for sympathy, but just to say my sweet husband couldn’t be here in person so sent me these beautiful flowers. Thanks @chief_sw_williams ❤️❤️❤️ they made me smile! But it was hard to get up to answer the door. Lol and Barb don’t get mad. 😘
Ahhh.... it’s going to be a good day. Good morning my friends! Have a wonderful day!! Oh and yeah, GO CHIEFS!!
Don’t stop watching! It just gets better and better! #sunrise #godshandiwork #showoff
Look at it now! Such vibrant colors! I love how the colors in a #sunrise can change in an instant.